Binance Coins, going by the name BNB is the brain child of the World’s Largest Virtual Currency Exchange Platform known to the World as Binance. The Company was launched in the month of July last year as one of those ERC20 token built on Ethereumblockchain. It raised massive fundings which was close to 15 Million USD through their Initial Coin Offering. Even though it was founded in July 2017, it has become world’s largest cryptocurrency exchange desk with respect to the Trading Volume of the Alternate Coins. Even in the recent blemish market situations, Binance still has come on top without damage due to the Volatility of Environment at present and all these heigh

ts have been achieved just in a span on 10 months of company being functional. (The exchange reached highs in trading volume by April, 2018)

As reported by The next Web,

This stark rise made BNB — which is primarily used to pay for services on the exchange desk— one of the most valuable cryptocurrency assets of 2018.

BNB has done a good business and it has come far from where it opened. It opened on July 25, 2017, at $0.11 on the first day of its public trading, according to the data published by CoinMarketCap. By January 1, 2018, it was worth $8.63 which was near to 75 times increase and then it achieved an all time high at of more than 24 USD in Jan. Most of these gains were made in late December till January in line with the overall cryptocurrency market growth. As reported by The Next Web,

“BNB came into 2018 with a positive note thanks to the massive gains made in December the previous year. Data source: eToro.com

BNB had a good start in 2018, rising up to $24.46 in the second week of January, but saw a market correction soon dropping by nearly 30 percent in less than 24 hours. 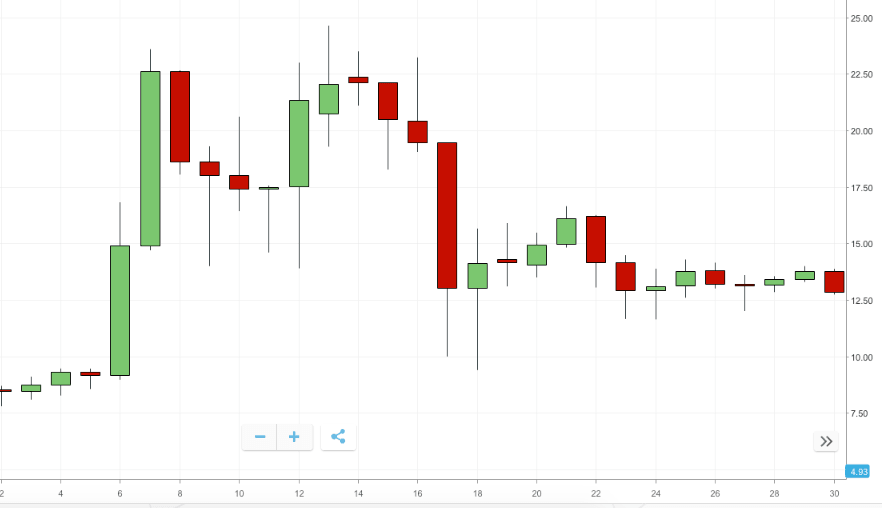 BNB saw a major upswing in the second week of January, only to face a correction soon after. Data source: eToro.com

BNB hit further lows, dropping down to $5.72 in early February, but made another recovery soon after. BNB market price oscillated between $12 and $16 for much of the next six months until August, crossing the $17 mark only on a couple of occasions in June.

BNB hovered around $10 between mid-August and mid-November, relatively stable by cryptocurrency standards. But, it seems to be bidding farewell to 2018 on a terrible note — the cryptocurrency has fallen to $4.5 by mid-December. It is the lowest market price BNB has seen in 2018, marking a massive 81 percent drop through the year since its highest price achieved in January.

As of December 17, BNB is at its 2018 lowest after seeing relative stability until mid-November. Data source: eToro.com

Accomplishments of Binance in 2018

2018 marked a good start for Binance as it was already in limelight for being the fastest growing cryptocurrency business in the world. The company’s CEO Changpeng Zhao, also known by his friends as CZ was ranked as the third richest person in the cryptocurrency industry by Forbes in February, only behind Ripple co-founder Chris Larsen and Ethereum co-founder Joseph Lubin.

The road to glory wasn’t a cake walk for Binance as it had to deal with scammers and phishing attacks but after pinpointed the cause to be a phishing attack and denied any compromise of its platform, things became smooth again. As reported by The Next Web, The company announced a $250,000 bounty to be paid in BNB for any person who leads to information that can be used to legally persecute the offenders.

After this incident, it was time for Binance to come up with something even stronger and that when it announced its intention of launching its own blockchain to create a decentralized exchange and move the BNB token away from the Ethereum platform.

As reported by many industry experts,

In June, Binance announced a $1 billion venture fund for blockchain and cryptocurrency startups, with investments to be made in the BNB token.

After facing troubles in some of the Asian countries, Binance looked to expand in other regions in late 2018, especially Africa. The company launched a fiat to cryptocurrency exchange desk in Uganda, and also managed to enter Singapore with an investment from Vertex Ventures.

In December, Zhao announced that the decentralized exchange called Binancechain will launch in early 2019.

How Tesla And BMW Are Leading A Supply Chain Renaissance With...

The Traders’ War… New vs Seasoned… Trading Crypto with Eugene

Bitcoin is Making its Way to $12K and Beyond as BTC...

What is a central bank digital currency?

ABOUT US
Snapperbuzz is India’s one of the largest online news portal, exclusively catering all the information of the Cryptocurrency market & Blockchain technology to a large number of interested readers.
Contact us: snapperbuzz@snapperfuturetech.com
FOLLOW US
© Snapperbuzz 2018. Website Designed & Developed by Snapper Futuretech
Language
MORE STORIES

Gartner: Blockchain Will Deliver $3.1 TrillionDollars in Value by 2030